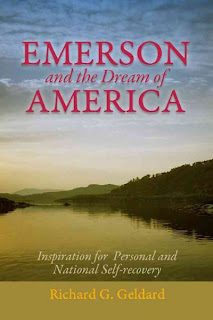 “Daring to Be Audacious”

As I write this review, the Republican party has just unveiled its new “Pledge to America,” similar to their 1994 Contract With America, which is an interesting and thought-provoking parallel to the title of this book, which, to me, is really two books in one, a notion I would like to explore up front and then move away from.

Richard Geldard, an internationally known expert on the writings of R.W. Emerson, shares his subject’s passion for the state of America, including what is wrong, ideas on how to fix it, and who is to blame. While I agree in theory with much of what Geldard says in chapters such as “A Call to a Nation,” “A New Great Awakening,” “America as Opportunity,” and “Wealth and Economy” I feel compelled to warn the reader that Geldard puts the blame squarely on the Right-Wingers and Republicans and paints what I feel is an overly optimistic portrait of what Barack Obama and his message of hope will do to change the trajectory of our country.

Just to be clear—I am in no way fond of or inclined to make excuses for the past policies of the Bush administration and their cronies, nor can I disagree with Geldard’s recent blogs on the Huffington Post about Glenn Beck and the Tea Party; by the same token, I have many reservations and questions about our current president (none of which have to do with his place of birth…) and I find the author’s level of faith in him and his policies to somewhat taint an otherwise thought-provoking and important book for our times.

Having warned the reader who might share my political concerns, I can move on to the real focus of this review—Geldard’s expert exploration of the most applicable of Emerson’s essays to these Modern Times.

Throughout the preface and the book’s 12 chapters and 2 appendices, I learned a great deal about Emerson and the era in which he was writing that helped put his essays in perspective. For instance, I did not know that, following his daughter’s marriage into the Forbes family of Boston, that Emerson was to become one of the ten wealthiest men in Massachusetts. As one of America’s most quoted and influential philosophers, Emerson is vital to our understanding of ourselves as individuals and as the collective known as “America.”

Whether he is explicating New England Transcendentalism or the Dream of America (as opposed to the American Dream), Geldard does a master’s job of selecting crucial passages from Emerson’s works and setting them in the context of currently pressing issues. He interprets and elaborates on the multi-layered threads in a way that will open these at times difficult to read essays to a much broader audience (hence the irony of his distinct political leanings).

The main essays from which Geldard draws are “Experience,” “Fate,” Nature, and “Self-Reliance.”

As Geldard states, “Emerson himself has been reduced to a purveyor of slogans and aphorisms empty of meaning outside their context” (50). Chapters that best remedy this and reconnect the man with his context are “Emerson and American Religion” and “Idealism and the Perennial Philosophy.” These chapters not only situate Emerson in his own time, but track his intellectual and spiritual connection to those who also went on to influence modern thought, such as Aldous Huxley and Ananda Comaraswamy. It was a surprise to me just how much Emerson was in tune with the nexus of Spirituality and Science—what is now called Quantum Mechanics (explored with increasing emphasis through chapters 5–7).

The two appendices contain passages from Emerson’s works with no commentary. These sections will hopefully serve as a bridge for readers who want to return to Emerson’s writings with a new perspective having read Geldard’s book or perhaps those who follow the recommendation of this reviewer and read Emerson and the Dream of America as their introduction to one of the most important philosopher-writers our country has ever known.

Joseph Madia’s reviews have been appeared in many syndicated publications. He is a playwright for the New Mystics Theatre Company, and the author of Jester-Knight. Learn more about Joey Madia at www.newmystics.com.