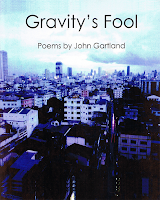 “Far from the Fool”

a review by Joey Madia

Many a modern poet has stacks of unsold books filling the corners of his or her writing room. This is a matter of both competition as well as the lamentable lack of interest in poetry in today’s reader. Perhaps as condensed forms of Communication continue to emerge, based on the requirements of Social Networking sites, poetry will re-take its place in readers’ daily lives.

In the meantime, it is good to know that some poets, such as John Gartland, are putting out additional editions of their titles. This fourth edition, published by Assumption University Press, features a new final poem and a few words by Steve Conlon, Dean of the Graduate school, about Gartland’s collaboration with Tom Hodgins (Poetry Universe 1: Poetry without Frontiers, which I will be reviewing later this year).

Gartland is a novelist, playwright, and poet, and a founding member of the Poetry ID writers’ workshop in England. He is a teacher of writing who has taught in Bagkok, Thailand and now in Chungbuk, Korea.

His poetry resonates with the self-sure voice of the man from the West who has journeyed to the East and is working to assimilate where he has been and where he now is into adjoining and at times overlapping landscapes. His breadth of travel is complemented by his breadth of knowledge. His poems are full of literary and geographical references that ground and gird his ideas and visions, creating a tension of Concrete and Abstract that sings sharply in the modern poetic form.

He begins the collection with the following haiku:

Those headlights in the
mirror are your death, so keep
your foot on the gas

The Death theme, that elder companion of the poet from Keats to Corso, abounds in Gravity’s Fool, tied to landscapes and relationships, to love and the relentless pursuit of life. One gets the sense that Gartland, having participated in loss in so many of its forms, is seeing with new eyes, drinking up and cataloging images the young and ignorant rarely note, much less process. To read “Nothing but the River (the Thames at Wandsworth Bridge)” is to witness the flotsam and jetsam of time’s running waters in all of their intermixed ugliness and light.

“Poetry ID” illuminates for the reader some of Gartland’s raw material on his journey to the condition of Poet, after having heard the familiar words put upon all (good) young poets by their mentors: “It’s all right, but live some more./You need to go out and live some more.”

And so he did.

Being a teacher of the craft, Gartland explores the condition of the writing outside of his own experience as writer, most notably in the poems “Poetry Escapes during Questioning” (a nice companion piece to Billy Collins’ “Introduction to Poetry” should you be a poetry teacher looking for perspectives on the craft to give your students), “Chez Parnassus,” and “The Company of Poets.”

Gartland’s experience as playwright informs the poem “Letter to John Wilson,” which is a worthy challenge to the well-trained actor looking for less-traveled, multi-leveled monologues. This poem leads a section devoted in great part to Death. Death of love and death of family. Death of epoch and of edifice. All woven together with a subtle similarity in phrase that begs pointing out:

“the plumes of rising steam” (“Letter to John Wilson”)

“we drift away, like smoke” (“Retrospective [for Lyall Watson]”)

All of these poems set up the series of the next three poems, dealing with Gartland’s daughter Laura. As the father of a ten-year-old girl, I found these poems in all of their simple beauty, enviable connection, fine art, and lingering ghosts to be some of the best of this collection.

As I mentioned earlier, this fourth edition ends with a new poem, called “The Market in Cheongju. Night.” What was most striking with the placement of this new piece is the sea-change it signals for the book.

The previous final poem, “Jesting Twilight,” ended with the phrase “I am waiting.” “The Market…,” by contrast, ends with “crash the iron bolts,” bringing to mind Whitman’s “Unscrew the locks from the doors/Unscrew the doors themselves from their jambs” that serves as an epigram to Ginsberg’s Howl.

Gartland is no longer content to wait, and we, as his fellow travelers on this road of poems, mustn’t either.

Gravitys Fool reaffirms for the long-time practitioner of the poet’s art just what good poetry really is and the life-work that all worthy craftsmen must put in; therefore it is also essential reading for the young poet first embarking on his or her path of words and their inevitable wounds and wonders.

Joseph Madia is a playwright for the New Mystics Theatre Company, and the author of Jester-Knight. Learn more about Joey Madia at www.newmystics.com.