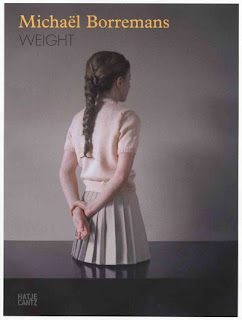 Michaël Borremans has said, “I use clichés and other elements that are part of a collective consciousness my work would be perfect on biscuit tins.” He creates absurd and sometimes ominous paintings. “Horse Hunting” (2005), for example, depicts, in a muddy palette, a pale and moody-looking man in a suit jacket and crisp white shirt shoving two twigs up his nose. He stares straight at us, and the wall behind him is filled with his shadow. At the 2006 Berlin Biennale, Borremans showed a film on a small LCD screen, which he had framed like a painting. The piece was based on a 2002 drawing of a girl, which he reproduced in three dimensions, so that the girl slowly spins around. That idea he transformed into separate paintings that are included in this catalogue, fine representations of a show by the name of WEIGHT that at De Appel in Amsterdam. Whatever the medium, Borremans’ work bears this trademark sense of absurdity verging on menace.

Michaël Borremans was born in 1963 in Belgium and spent the early years of his exploration of art in the fields of photography and design. As this intriguing and exceptionally well presented monograph reveals, those years of training polished his observing eye and ability to appreciate spatial relations, factors which when he turned to painting have served him very well indeed. ‘The subject is an object to me,’ he has stated. His scenes of single figures or groups of figures are essentially motionless, as if frozen in time, a significant aspect is that they represent ‘clichés and other elements that are part of the collective unconscious…Sure, there is nothing there. On the other hand, all is there’.
His figures are in many ways unremarkable or mundane, simply performing stationary tasks in a moment of time. Some would ask ‘why paint them’ until the viewer becomes more sensitive to the manner in which Borremans paints: his brush strokes are deliberate, almost abrasively confident, as though what he is saying about what he is seeing is a personal dialogue between the artist and the ‘model’. Yet it is just this manner of confidence that lends his paintings a sense of timelessness and importance.

Borremans palette of browns, grays, musty colors define the image and only occasionally does he add bright color to jar the eye. Another aspect of his work is his frequent use of the top of the figure alone, placed inconspicuously on a tabletop: the meaning? But by far the most frequent ‘subject matter’ of each of his paintings is simply a person, looking down, an object either present or absent, and the titles he attaches to these conundrums may seem to bear no affinity for the work. Accompanying essays by Ann Demeester, Delfim Sardo, and Massimiliano Gioni add three separate perspectives to Borremans’ work.